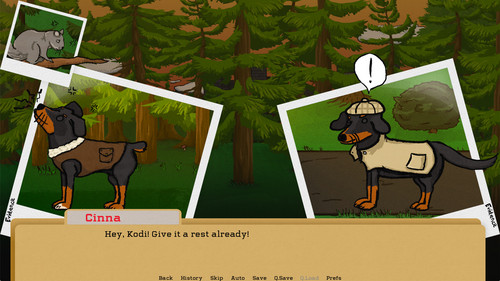 Today is my first devlog post for EyeBrow Gang Chronicles Vol. 1: Detective Cinnamon and the Case of the Cat Napper.

The title is very long, but I like that. It sounds very dramatic when in actuality it's just two dogs walking (pawing?) around a city.

Anyway, yes the demo is out now. I made a goal for myself to finish one demo for a video game, just to prove I could do it.

I mean, of course I intend to finish it first, but you can't really think about finishing a video game if you've never made one before. You don't even know what to finish.

So I settled on what I wanted to do, figured out what I needed to do it with, and then worked on doing just that.

I wrote out my script, rewrote and modified it as I learned to code and draw assets, and finally  reached a point where I felt okay enough with posting it online and sharing it with people who know me.

Anyway, it's a visual novel. I actually didn't start playing visual novels until pretty recently. I've always known they existed, but honestly just thought they were a bunch of dating sims for straight men (which they are).

But visual novels have been some of my favorite gaming moments over the past few years.

The first one I played was with a group of friends. We were trying to make a podcast (which is like a stage that everybody goes through nowadays. Childhood - puberty - turn 21 - try to make a podcast) where we talked about video games. I saw that Hatoful Boyfriend, a visual novel about dating pigeons, was on sale and just jokingly suggested we all buy it and talk about it on the podcast.

What I thought was just going to be a long joke actually turned out to be a pretty engrossing story. Afterwards I learned that it was largely made by one woman who was an artist and not someone who had a deep knowledge of game development.

I researched what she used to create her game (Ren'Py) and then started working on my own project.

Originally I was going to do something else, but I was trying to do too much for my first project. That got scrapped and I instead focused on something my life already revolves around - my dogs.

Why a detective dog?  Well, my partner and I always pretend that our two dogs have different jobs. Kibble model, Pawfessor of Derpology, Dog Park Sheriff and lots of other very important things.

I had also just finished playing through the most recent Jake Hunter game for the 3DS and loved the tone and feel of that game.

Cinna and Kodi could be detectives. They basically are every time we walk around the city.

Gotta investigate this bush, um who's that dog over there, wow where did that smell come from, oh um sorry but I really gotta sniff this butt for security reasons.

Detectives are cool too. Pretty classic and timeless imo.

I recently went to a feedback event created by Ryan Kubik (who is making the game Wildfire) so thank you to everyone who played some of EyeBrow Gang Chronicles and gave me feedback!

My most recent update to the demo changes the backgrounds of individuals from an octagon shape to a polaroid shape. I think it fits the visuals of the game, serves its purpose of elevating the characters, and isn't as horribly distracting as the octagon shape.

The characters in EBGC (EyeBrow Gang Chronicles) are a little different from most visual novels I've played. Usually character portraits take up the entire screen, mostly from lower waist up. This makes the character look like they're standing in front of you and keeps the background looking like its name - background. Ground that's in the back.

But my characters don't take up the entire screen. They're dogs and, aside from when you ask them to jump, they don't really walk around on their hind legs. I mean, they could if I wanted to do like a bojack thing, but I don't want to.

So without the individual character backgrounds my sprites look like they're physically standing in the background. Only it's not a background now because it looks like foreground. In order to keep them separate I've had to physically place something for the characters to exist in while still allowing the background do its job (giving you, the audience, an idea of what the character's surroundings look like).

This is attempt #1 at fixing that. I'm going to try and attend some more feedback nights and get more thoughts from people. If you play it, please let me know what you think.

So that's my update. Thanks for reading and playing! 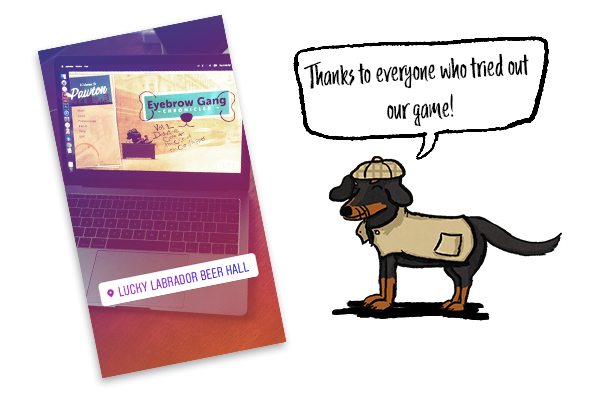